Though we cannot be together celebrating, we hope you will join us virtually and celebrate the MMFS community, share in congratulating our 2021 Violet Longobardi Award recipient, and enjoy entertainment and surprises from the MMFS community, past and present.

We welcome MMFS parents, students, grandparents, aunts, uncles, godparents, alumni, faculty, staff, and friends! This is our annual fundraiser, and although there is no charge to attend, we ask you to consider making a donation when you register. All contributions are 100% tax deductible. 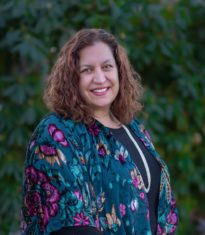 Ginny Perrin, MMFS Director of Operations and Outreach, has worn many hats in her 28 years with the school. First and foremost an educator, she has run Camp Marmac, served as Curriculum Coordinator, Tech Coordinator, and Upper Elementary Division Head, and overseen the development of the Mary McDowell Teaching and Learning Center.

Ginny’s most unexpected achievements came as MMFS repeatedly turned to her to help the school grow, both literally and figuratively. In 1999, she helped us work with architects and contractors to turn a former cheese factory at 20 Bergen Street into the permanent home of Mary McDowell Friends School. When the middle school needed its own building, MMFS again turned to Ginny to oversee the buildout of Summit Street. Next, Ginny led a multi-year, multi-phased project that culminated in the opening of the upper school at 23 Sidney Place in 2011, at which time she assumed the management of all three buildings.

In 2016, MMFS embarked on its most ambitious project yet: the expansion and renovation of the lower school building on Bergen Street, with Ginny at the helm. But never did Ginny imagine that the experience she acquired from these projects would be called upon to ensure the health and safety of every student and staff member during a global health emergency. Ginny almost single-handedly transformed MMFS into its current incarnation, creatively turning every inch of every building into socially distanced, properly ventilated and sanitized learning spaces.

Thanks to Ginny’s bone-deep understanding of the needs of our students, her tireless research into current health and safety standards, and her abiding commitment to our community, MMFS has been able to continue providing the education our students need and deserve, even in the midst of a pandemic.

Full-page digital journal ads will appear on the benefit website and will be distributed to the MMFS community during the Virtual Benefit 2021 on May 20. Inclusion of a video message-recorded and no longer than 15 seconds.

Full-page digital journal ads will appear on the benefit website and will be distributed to the MMFS community during the Virtual Benefit 2021 on May 20.

Half-page digital journal ads will appear on the benefit website and will be distributed to the MMFS community during the Virtual Benefit 2021 on May 20.

Quarter-page digital journal ads will appear on the benefit website and will be distributed to the MMFS community during the Virtual Benefit 2021 on May 20.

Share what you are “MMFS Grateful For” and our Gratitude Wall Montage will appear on the Virtual Benefit 2021 as well as in the digital journal.

All 2021 sponsors will receive prominent recognition during the Virtual Benefit 2021, on the MMFS and benefit websites, and in marketing materials.

Get More Information on MMFS

Mary McDowell Friends School is a K–12 college preparatory program dedicated to the success of students with learning disabilities. Grounded in the Quaker values of equality, integrity, and social responsibility, we cultivate a diverse and anti-racist community in which all students can reach their full potential. Our specialized teaching methodologies and challenging curricula empower students to become academic achievers, creative thinkers, advocates for equity, and contributing members of a global society.